Kanchanaburi is a hamlet around 130 kilometres from Bangkok that serves as a favourite getaway for individuals looking to get away from the madding crowds. The protected regions’ flourishing tropical wildness is a breath of fresh air. Visitors may explore a labyrinth of underground passages, see a wide variety of animals, and retrace the region’s rich history. There is a wide range of attractions, experiences, and activities to be had in the province of Kanchanaburi. Kanchanaburi welcomes both history and nature fans with open arms.

Kanchanaburi, a province in Thailand, blends the modern with the ancient. It’s one of the best spots in Kanchanaburi to see chilling yet impressive war relics from the Second World War. A visit to a few of the museums and monuments dedicated to the conflict will seem like a trip back in time. In fact, the items unearthed from the excavation sites allow you to go back in time to the Neolithic era. In addition to its sombre but rich history, the province’s impressive scenery is a major draw. Visitors come from all over to enjoy the region’s calming hot springs and crashing waterfalls. 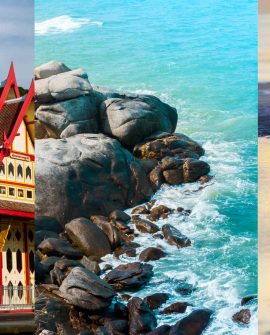 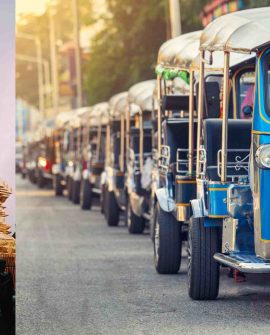 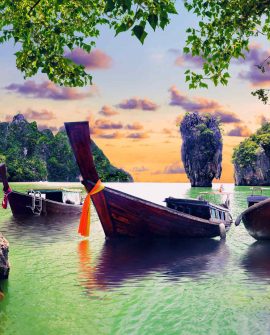 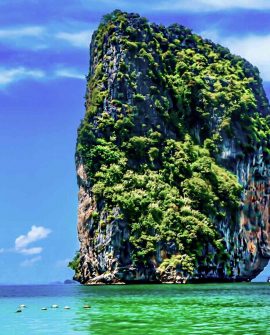 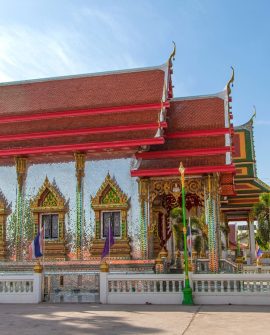 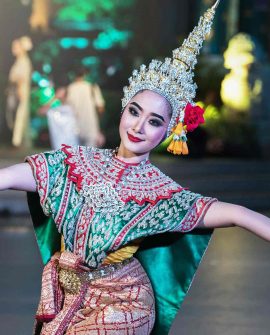 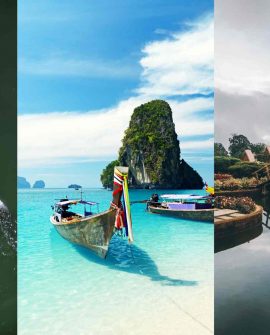 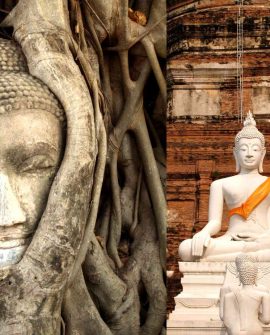 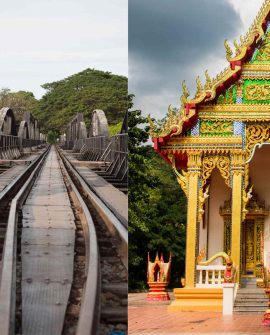 There are three different seasons in Kanchanaburi’s hot tropical climate: the dry and relatively mild season, the wet and stormy west monsoon season, and the milder winter months. Travelers to Kanchanaburi would be well to think about the time of year before setting off, since going at the incorrect time of year may be either tremendously taxing or a total washout. The months of November through March are great for a trip to Kanchanaburi. All of Thailand is at its beautiful best between these two dates. The monsoon rains end in November, but the humidity rises in March, making sightseeing unpleasant.

Extreme heat and humidity are common from March to June, when the monsoon rains begin. April is often considered as the worst month to visit Kanchanaburi due to the high temperatures (often over 40 degrees Celsius) and high levels of humidity (sometimes close to 100%). The heat makes it impossible to sleep without an air conditioner, and even the smallest amount of exercise demands gallons of water.

Though the rainy season extends from July to October, it begins to taper down towards the end of the month. Even during the rainy season, it seldom rains for more than a few hours at a time, and even then, the sun generally comes out within a few hours. Exploring the region in September and October allows you to take advantage of significant discounts since these months are considered off-season. The busiest time of year for tourists is from November until around the middle of February.

As a result, hotels fill up quickly, and sights like the Tiger Temple get heavy foot traffic. Even though this is the “chill season” for the locals, tourists will be out and about in shorts and T-shirts and turning on the air conditioning at night. Daytime highs average 26 degrees Celsius, while the humidity hovers around 70 percent, making it uncomfortable for most visitors.

Things to do in Kanchanaburi

Western Thailand’s Kanchanaburi province is just a few of hours from Bangkok, but it has a more sombre message to spread. Kanchanaburi town is famous for the Bridge on the River Kwai and its vibrant backpacker culture, but it also has a sombre past as the site of the Death Railway.

All of this, plus aggressive courtship of friendly Western relations, is believed to have “westernized” what was then Siam to an extent that discouraged colonial powers from seeing a need to establish a claim on the country, as they did with other Southeast Asian neighbours. Thailand may never have been a colony, but it has been invaded by many different countries throughout the years, notably the Japanese during World War II.

Located less than three hours west of Bangkok, Kanchanaburi is home to some of Thailand’s most famous and significant battle relics. To lessen its dependence on maritime supply and ease its forward movements into India, Japan after its invasion tried to construct a transit corridor via Siam into Burma, which it also conquered between 1942 and 1944.

The most notorious of four railways the Japanese built with slave labour during this period, the Death Railway was finally finished in October 1943 at an unimaginable human cost. It functioned for a while before June 1945, when damage from British and American air attacks made it useless. Many of the POWs who had laboured on the railway were sent to Japan after it was finished. Many were sent to neighbouring camps, but a considerable number still died, including those who had been kept to do maintenance work in much riskier circumstances before to and during the Allied bombings at the conclusion of the war.

This structure can be seen just across the street from the Kachanaburi War Cemetery, also known as the Don-Rak War Cemetery. Located in the Thai city of Kanchanaburi, the Thailand-Burma Railway Centre serves as both a museum and a research facility. This organization is privately sponsored and directed by Australian railway historian Rod Beattie. The greatest knowledge on the Second World War in Thailand, the building of the railway through thick walls of rock and deep, hot jungles, and the horrific circumstances faced by POWs and Asian labourers can be found at this privately owned and operated institution. Unfortunately, our trip did not include this museum. Visitors to the building have praised its interactive and moving displays, including videos. Your visit will take at least an hour, and maybe more time if you want to read everything. Your ticket to the museum grants you access to the café on the second floor, where you may have a complimentary coffee or tea while sitting on the window seat with a view of the Kanchanaburi War Cemetery. Some visitors have said that this private museum is far better than the neighbouring JEATH War Museum (which we will visit shortly; for images of the latter, scroll down to the “Further Photos” section of this album).

There was so much devastation all around the globe because of the war. In addition, Thailand was not spared. Hellfire Pass, a disused railway cutting along the Death Railway or Burma Railway, is one of the locations in question.

During World War II, slave labourers erected the structure. The name “Hellfire Pass” comes from the skeletal figures of the inmates who toiled day and night to construct it.

The Hellfire Pass Memorial Museum is the main attraction; it was built to honour the memory of people who perished or were forced enslaved during the pass’s construction. Tom Morris, a former prisoner of war who was instrumental in persuading the Australian government to preserve the area as a museum, is credited for conceptualizing the idea.

The Australian government now cares for the site, and visitors can stroll along the rail line, listen to a guided tour, and experience the world as if through the lens of a war.

The stunning beaches, wild parties, and exciting water sports are certainly the most interesting attractions of Thailand to indulge the nature admirer, cultural vulture, and adventurer inside. But what if we tell you there’s more that the nation has more in store for you? Well, it does and it is clearly a one-of-its-kind venue. Located northwest of Bangkok in Kanchanaburi, the Erawan National Park is the nature’s most wonderful sanctuary and provides captivating experiences that will leave the animal lover inside you in amazement!

The months from February to April are hot & dry and it may become tough for you to visit the park comfortably. On the other side, in the months of May to October, Thailand suffers a rainy season and that may impair your trekking strategy. So, the optimum time to visit the Erawan National Park is from November to January since these months are slightly colder, which means you’d be able to engage in all types of pleasures.

This is a non-profit organization that eliminates animal mistreatment, advocates human-animal relationship and at the same time promotes quality time with the animals. One may help care for the elephants throughout the day by planting and preparing their food, feeding them fruit and sticky rice, and even enjoying the experience of bathing and cleaning them in the river as part of a day program. A number of daytime activities and an evening spent in a hotel near the River Kwai are also part of the overnight arrangements.

In addition to relaxing in the countryside and walking elephants to the forest, guests may enjoy both activities throughout their stay. The mahout program is for individuals who sincerely love elephants and wish to be in intimate touch with the wildlife while experiencing Thai culture.

One of three cemeteries where POWs who perished while building the Burma-Siam Railway are laid to rest is Chungkai War Cemetery. Coffins are dragged from several burial grounds along the railroad and deposited in one central area.

The Chungkai War Cemetery was built by the Japanese during World War 2. Nearly 1,400 soldiers from the Commonwealth are buried there. Additional 314 war graves are located on Dutch territory.

Northwest of Kanchanaburi city, in the districts of Sai Yok, Si Sawat, and Thong Pha Phum, is Khuean Srinagarindra National Park, a total of 105 kilometres (65 miles) from the city. 1,532 square kilometres or 957,500 rai make up the park’s total area (592 sq mi). [1] The Srinagarind Dam on the Khwae Yai River creates the Srinagarind Reservoir, the park’s focal point.

The park’s caverns, notably Tham Phra Prang, were utilized by Thai warriors as a hiding spot during the Thai – Burmese battles in the 18th century.

The style of the building dates back to the Late Lopburi period, perhaps between the 16th and 18th centuries. The planned city covers an area of around 316 acres, and it is perfectly square.

Witness the Khmer-style city, which was said to be used in Buddhist rituals. The park’s transformation as a national park begins in 1974 and lasts until the year 1998. It has also been suggested that the architecture here is reminiscent to that of the 7th Khamer king, Chai Woraman. The complex is divided into three distinct areas. The 1st zone is where the castle stands out the greatest. When compared to the first zone, the second is much more compact. In the third sector, the only part of the castle that exists is the keep. Only the castle’s outlines remain in the fourth zone, but archaeologists in that area have discovered a number of artifacts, including human remains.

Located in a former Neolithic burial site, Ban Kao National Museum gives insight on Thai history 4,000 years ago, presenting a range of items such as antiques, fossils, jewellery, human bones, pots, axes and more. This tiny museum is regarded one of the most significant ancient archaeological sites in the nation.

Its source is a mountain spring that feeds a little stream, which in turn runs into 15-meter-tall limestone cliffs that sprawl over the hillside and provide shade for a wide variety of flora. A modest, single-tiered waterfall, this one sees plenty of water throughout the wetter months but often dries up during the hotter summer months. This waterfall is situated on the major road, barely 60 kilometres from Kanchanaburi city, making it easily accessible.

waterfall of Sai Yok Noi This waterfall, sometimes referred to simply as “Khao Phang Waterfall,” has been a tourist attraction for decades. Khao Phang Waterfall got its name because it began life as a limestone cliff before plunging to the ground below as a cascade of limestone boulders.